A Whisper in the Night

(an excerpt from David Daniel’s new book, We’ll Always Have Paris, due out on Amazon on May 6, 2020)

“You will meet a woman in Paris.”

The phrase was so direct and to the point that I almost disregarded it as quickly as it entered my mind while standing alone in my kitchen. Who was this voice?  What was this voice trying to tell me?  My father had passed away only a few months earlier, and my 15-year marriage, on life-support, had unceremoniously come to an end at around the same time.  To say the least, things were unsettled.  The voice itself was unsettling. 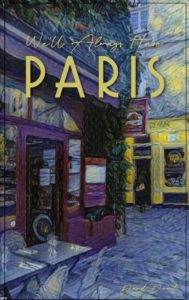 The last thing in the world I was even considering was meeting a woman.  For the first time in years, I was finally able to spend some time alone to collect my thoughts and determine the direction of my life moving forward.  I was about to embark on my first AFE Tour (Armed Forces Entertainment) for the United States Military in six weeks, indeed intending to conclude my trip in Paris, but meeting a woman there was not on the agenda.

No way; I was free once again.  Becoming tethered to another person’s journey was the absolute furthest thing from my consciousness.  Life, thankfully, always seems to have other plans for us, oftentimes far more delicious than anything we could ever conjure up.  It is only hindsight that has afforded me this more enlightened viewpoint; however at that time, I was still hell-bent on my own ideas of what was to come.

Sometimes our authentic self is so far hidden beneath the surface that we wouldn’t recognize it even if it approached us and said, “Hello, I’m your Authentic Self.  Would you like to have a cup of coffee?”

“You will meet a woman in Paris,” this persnickety voice repeatedly uttered to me from the far reaches of my subconscious.  I swatted the idea away like a fly buzzing around a deliciously melting ice cream cone.

“On your way, Fantasy!  I have no time for nonsense,” I said while continuing to wash my dishes.

Our intuition is powerful.  That astute knowing without really knowing is somewhat of a mystery.  This power that everyone holds is activated by the pineal gland that sits in the brain acting as a Third Eye.  Throughout the ages, sages and mystics instinctively knew that the pineal gland, a small endocrine gland in the vertebrate brain resembling a pinecone, also known as the conarium or epiphysis cerebri, is a powerful gland that aligns us with Universal Knowledge.

From Greek mythology to the Roman Empire, the Swamis of India to the bushes of Africa, generations of humans have displayed the pinecone as a symbol of the pineal gland and its divine power to guide us through our life.  These clues were left by the ancients as a reminder of the power of our intuition:  the pipeline to the thoughts of God, the Universe, Shakti or whatever other term one might use to describe Universal Creation and Wisdom.

“You will meet a woman in Paris.”

I quickly removed the thought in my mind which, oddly enough, took on the energy and sound of my father’s voice.  My father, when he was alive, found joy in telling me exactly what I needed to do in order to bring happiness into my life.   Hearing him say, “You will meet a woman in Paris,” aligned perfectly with the words he might utter if he were still alive.

As a matter of course, I playfully said silently but pointedly at my deceased father, “Mind your own business,” and returned to washing the remaining dishes in my sink.

On a tangential note, I was beginning to find some balance after years of emotional floundering for the first time in my life.  I felt like I could breathe again.  Through no fault of anyone but myself, I had gotten lost in a maze of discontentment trying to fit into a society that made little sense to me.

When one abandons their truest self in exchange for societal acceptance and material rewards, over time those exchanges take a toll on our spirit and eventually leave us feeling empty and confused.  However, once the light is shone on the Authentic Self and we awaken again, the path to the Divine Self becomes illuminated and we proceed to our destiny.

In my thirties, I set out on a course to be accepted by society in the hopes of receiving the approbation of my friends and family.  I had gathered all of the things I was supposed to work towards acquiring and achieving and put a big red check mark next to that aforementioned goal.  Incidentally, all of these things that were supposed to bring me contentment had failed to do so, and I was left with only one thing to do:  trust my instinct and listen to my own inner voice.  I have discovered that this will never lead a person astray.

My inner voice was screaming at me to find a new path, which at that time included moving into a small one-bedroom apartment, gathering up the pieces of my life and then gluing them back together in a fashion I found desirable. I would have loved to blame my ex-wife for my wayward journey, but the truth of the matter is I couldn’t.  She supported me and lent an ear when I needed it.  What I discovered was that I had a case of wanderlust that compelled me to go out and explore the world.

As a man, it is important to remember and understand that we can only ignore a woman so long before she wises up and finds the fulfillment that can bring her her own contentment.  I fully accept my culpability in the demise of my relationship.  I may not have married at too young of a physical age, but I did so at an incredibly immature emotional age.

I simply wasn’t prepared, nor did I understand the commitment I had made, and even as I write this cannot fully grasp what it was I had agreed to so many years prior. To my ex-wife’s tremendous credit, we share a friendship to this day that allows us to co-raise our children with only an occasional ripple in our otherwise calm pond.

As I was finishing my dishes, I couldn’t help but be mildly curious as to what this Parisian woman might act and look like.  Would she speak even a word of English?  How would she dress?  What would our time frolicking around Paris look like?  The fantasy that played out in my mind took on the tone of a film from the French New Wave.

Even though I professed little interest in meeting a woman, I was not-so-subtly creating the narrative of how this fantasy might play out in the recesses of my mind.  My imagination started running wild as I realized that no matter how much we intellectually may want to avoid falling in love, the essence of our very being desires love so strongly that there is little we can do to temper those desires.

I went to bed that night wondering what the future held for me.  In hindsight, there is no way I could’ve conjured up what was to come, for the Universe had far more creative plans than I could have conceived.  This is the beauty of life on this plane: when we let go and co-create with the Universe, each taking a step in a cosmic dance, what we come up with together is far superior to what we could come up with by ourselves.

Life really is a two-step with the Universe.  We take the first step, our intention, and the Universe responds by bringing all of the people, situations and things needed in order for us to manifest that intention.  We keep our intentions “general specific” (meaning we state what we desire without requiring it to look a certain way) in order to give the Universe a share of the canvas so that it may paint the portrait of our dreams.

This is why it is incredibly important to center those thoughts on the things that you actually desire, not the things that you “don’t want.”  Instead of thinking, “I don’t want to be overweight,” we modify it by saying, “My body is healthy and the perfect shape and size.”

These ideas took a long time to ferment in my consciousness.  For years I had read New Age accounts of intention and honestly thought it was rubbish.  In my younger years, I felt it was only “feel good” mumbo jumbo with no basis in reality, but what I didn’t know then that I now know is that my very mindset back then was what was preventing me from manifesting the things I desired.

What we think IS important, however what we believe is what truly manifests into reality in our lives.  Thought is the key in the ignition that starts the car.  Belief is the spark plug that fires the car to life.

Manifestation is when thought meets belief.  Think it, believe it to be so, and instantly it manifests into our reality.

As I drifted off to sleep, my Authentic Self was nudging me.  For years I had ignored him, pushed him down, and because of this I found myself in a place that didn’t feel quite right.  After many years I could start to feel the very beginnings of this thing called balance.  I felt something that resembled peace.  I hadn’t fully tried it on yet, but it felt like a really good fit.  It felt like that perfect pair of shoes after wearing a shoe one size too small for years.  There was nothing wrong with the old pair of shoes, they were just a size too small and this new pair seemed to fit perfectly.

That feeling brought me a sense of serenity as I cascaded into my dreams, those last melodious words of my father whispering, “You will meet a woman in Paris.”

This site uses Akismet to reduce spam. Learn how your comment data is processed. Ways you could touch someone’s life with very little money: